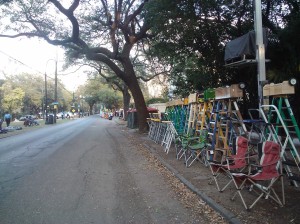 I had a long day at work today–teaching, meeting with students, grading, writing schoolmarm-y emails and glowing recommendation letters–and by the time it was over I was ready to just get home and put the heating pad on my neck. But first, PARADE! I had not forgotten that tonight we would get another parade, only one, but from here on out, every day is multi-parade, and they just get bigger and weirder (and sometimes, well, you know, klan-ier). And tonight’s parade has it’s own special creepiness–those guys on horseback with white hats and masks that fall down over their faces (um, hoods?) and every rider in the same creepy mask. The parade wasn’t for another couple of hours, but as I rode home down St. Charles, I saw so many people, already ready for parade. I snapped this picture as a view from my bike lane home. The place is covered with chairs and ladders staking out spots. This one even has a seat that appears to move on hydraulics or something, all the better to get over the crowd and in better bead-catching position. Put a cute little kid or two in there, raise it up, and haul it in. This is Mardi Gras, people. I rode the rest of the way home dodging the guys with carts filled with stuff that lights up, the cotton candy merchants, and the bands of roving NOPD officers, dropped the bike, and ran over to 6th and St. Charles for another parade. Excellent.