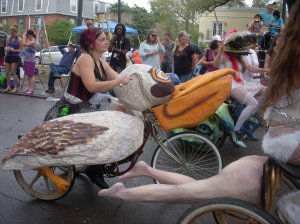 I spent yesterday on foot and was hoping to have a day of riding around town, from the Uptown parades over to Endymion in Mid-City and a night or riding around the Marigny and the Bywater and the Treme looking for pockets of friends doing this or that. If the rains slow, that might still be my night, but I woke up to sprinkles that portended the rain they predicted yesterday. I thought it best to get in an early (for carnival season) bike ride, so I headed out to ride the parade route in front of Tucks. I passed E., J., and M. on Louisiana, toting a wagon full of Popeye’s, which is apparently their Samedi Gras tradition–they only eat that stuff once a year, a committment I certainly do not share. I said my goodbyes and headed down St. Charles a few blocks until I ran into L. and her crew, and this time I decided to stay. Lucky me, the Popeye’s was headed there too, which meant two biscuits and a beer for breakfast. Hey, it’s Mardi Gras. The parade was wonderful–generous floats, loud bands (thank you, Carver (I think), for the rousing rendition of “Poison“), and great walking krewes–everybody dressed like a duck, everybody dressed like an apple, everybody dressed like a Stormtrooper–you know, the usual. The parade stalled, and just up the route from me was this wonderful krewe, tricycles dressed as different papier-mache animals, including a triceratops, an alligator, a unicorn, and this pelican. How awesome is that? A trike that’s also a pelican! Fan-flippin’-tastic. I collected my throws and scooted down the route to C. and P.’s for the second parade of the day. The rains started falling harder, and then the thunder and lightening, and people packed up to go, which of course meant more loot for those of us who weren’t going anywhere. I pulled in a serious haul and headed back to the bike for another ride. Two blocks later the skies had opened up, in that way that you can’t see a thing and it is just plain unsafe to ride a bike. I walked home, pushing my bike in the drenching downpour, looking forward to drying off–bike first, me second–and settling in for a lazy day waiting for the rains to stop. That wasn’t how I thought I’d spend my afternoon, but it’s perfect. Just perfect.