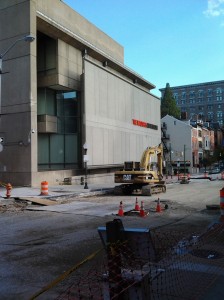 I spent the morning reading and writing and finishing this and that before I had to head to the mechanic’s to pick up my *gasp* car with its new windshield and scrubbed headlights; the State of Maryland has some stringent standards before they let you drive a car on their roads. Another hour and a half waiting at the MVA and I can officially drive here! But oh my goodness, I don’t want to. I headed straight home to get the bike to run some errands. Seriously, why drive for errands when you can ride a bike, especially when The Earth finally turned the lights on? I rode toward the library to return disc one and getting the next, but I had to take the sidewalk to get around the massive hole outside of the Walters Art Museum (which is free all the time for everybody, for real!). Some folks in the museum noticed some water leaking in a corner, and then they drilled outside to find the leak, and it turned out the water main had collapsed under the street here. Now it’s blocked off while they replace the old terra cotta pipes with something that’ll last a little longer. Yeah, there are probably a whole lot of pipes that need the same replacing, but it’s under the asphalt, so la dee dah, let’s just drive over it, pretend nothing’s going on. I got in and out of the library and headed down to Fells Point for ice cream in the sun on the pier, made a quick stop at a grocery store, and rode back home up the hill, happy to be out of the car and under the first blue skies we’ve seen in a week.

One thought on “Repairing a Water Main at Centre & Cathedral”