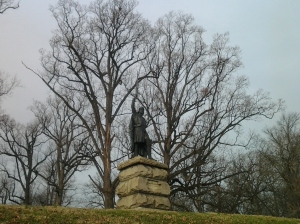 I was out with S. last night, and she suggested we get up early for a few laps around the reservoir at Druid Hill Park, her running, me on my bike. It seemed like a good idea at the time, but when I woke up all warm in my bed surrounded by cats, well, it seemed like a better idea might be to enjoy a vacation day in bed with coffee and books. But I said I’d be up for it, so I sent a text, sucked down some coffee, put on my wool layers, and headed out on the bike, and, as always, I was glad I did. I stopped three quarters of the way through my first lap to snap this picture of the William Wallace memorial statue on the far edge of the reservoir. The thing with memorial statues is that once they’re up, they’re up, and they are meant to memorialize, but it won’t necessarily be clear, 213 years later, why we’re supposed to remember what we’re being reminded to remember. I mean, William Wallace? How about a statue to a hero of Maryland, like, oh, I don’t know, Frederick Douglass or Harriet Tubman or John Hanson? But in 1887, Baltimore’s Scots community paid to have this statue copied and sent for installation in the city, so there you go, and why shouldn’t they be proud? There’s plenty of room for memorials and statues. And heck, it’s not a shrine to Stonewall Jackson, or that mammy monument the United Daughters of the Confederacy tried to have built. (The UDC offers a scholarship bequeathed by a Scottish woman who saw similarities between her history and that of the Confederate South, but I’m going to let that lie…) Shudder. I got back on my bike, did a couple more laps, used some of the other fitness equipment at the park, rode over to Hampden for shopping, reading, and brunch, and then back to my neighborhood. Yep, it’s vacation, and yep, I still like riding a bike.