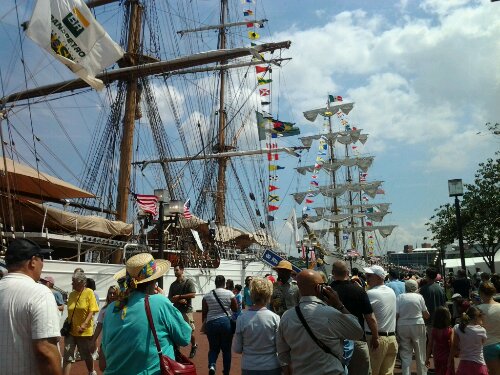 So it’s the bicentennial of the War of 1812, and Baltimore is pulling out all the stops to celebrate this war that nobody remembers. After finishing up my work at home, I hopped on the Surly and rolled down the hillfor a lovely lunch with V. before continuing my ride to the Inner Harbor to check out some ships. To be honest, I didn’t expect to be wowed by the ships, but I totally was; their sails just look lovely against the blue skies. You can board the ships for free, but Brazil closed early, and the line for Mexico was too bananas for me, so I got back on my bike and headed over to Fort McHenry. Being there on this particular Flag Day felt a little like that time I was at Jim Morrison’s gravesite on the 25th anniversary of his death–folks were having Emotional Experiences while I looked on. I traded facts about the war the exhibit doesn’t mention with a fellow visitor, his about the British freeing slave who then fought for their side, me about how we invaded Canada without proper preparations because we thought they’d welcome us as liberators. Oh, history. I toured the Fort, took some lovely photos of flags, and then dodged the crowd on my way back downtown, a quick stop for a haircut and some frozen yogurt, before meeting J. in Fells Point for dinner. Traffic’s a clusterf*k, so I hope he brings his bike. Yeah, I needed a day off like this one.