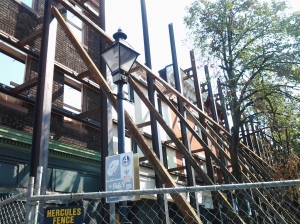 You know how sometimes you’re reading the perfect book at the perfect time? That’s happening to me right now, if in 30 minute chunks between my other work. After finishing up some teaching tasks this morning, I settled into the next chapter and read about criticisms of the historic preservation movement that elevated the look of things over the sense of place and community, that froze neighborhoods in a golden age, forgetting the people who actually lived there. I learned the term “facadism,” or aesthetics over interpretation–so that’s what that’s called, and people are talking about it. And then I went on a bike ride down to Harbor East, did a turn around the gym, and  got back on the bike for a ride in the perfect low-70s day. I headed east toward Fells Point, a district absolutely saved by historic preservationists–you should read about it. I took a left on Broadway and stopped to snap a picture of this facade being saved just a block or two north but technically still in Fells Point. I wonder what the impetus is to save this particular building. I decided to just keep riding up Broadway, even though I could see a hill I wasn’t much in the mood for. Turns out hills aren’t nearly as bad once you’re just riding up them. I rode through neighborhood after neighborhood, blocks changing quickly, through Johns Hopkins, its own redevelopment project, over and over again, up through Dunbar and left through Oliver, one of the deadliest neighborhoods in Baltimore right now, across North Avenue, through Barclay, and back home. It’s only 3.5 miles, but it’s through a whole, whole lot of redevelopment schemes, and some abandonment, too. Thank you, reading and riding, for the perspective.

One thought on “Facade Under Construction at Broadway & Pratt”