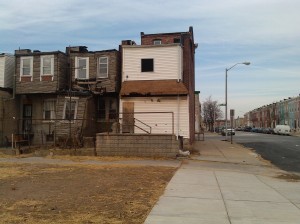 It was still super cold out today, but the roads were dry, so I happily took the bike out for my ride down the hill and to the left, to Canton, for a swim lesson. Also, I don’t know if you’ve heard, but the Ravens won the Super Bowl, and Baltimore is officially The Greatest City in America, so I wanted to ride around and see what all the fuss is about. I rode down the hill and wished I’d gone back for the hat I left on the chair in the living room. I rolled down and up and down again, through the school administration building parking lot filled with cop cars, over the bridge covered in broken glass, past the recycling truck and the tow lot, by the jails and the homeless service center and the post office, and then I was riding through Little Italy, passing through Perkins Homes, down through Fells Point and up Boston Street to the gym just the other side of the bank headquarters. S., the lifeguard, gave me my lesson today, and she was so proud of me for getting my arms and legs together in the breaststroke, and I’m not going to lie, that felt good. On the way home I rode up through Canton where I ate a sandwich and read for tomorrow’s classes before north to see what I would see if I just never took the left I needed to take to get home. Row after row of row houses, some just walls of brick, others broken up with color and siding, some like this, the backs literally crumbling off of them, like this one at Madison and Montford. Baltimore, the Greatest City in America, and then I finally took a left and a right on Broadway to take the bike lane til the end. Broadway curves around into 25th, but wow, that’s not a street I wanted to bike on today. I took some side streets and got myself turned around until I spotted that apartment building at 25th and Barclay. Almost home, but it looks so different coming from this direction instead of from the west or south, the directions I usually head from up here. It was a most excellent ride today, in spite of the cold and the part where everything’s really, really complicated.

One thought on “Blighted Row Houses at Madison & Montford”