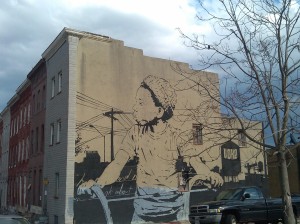 It was cold and rainy yesterday and dark and cloudy this morning, but by the time I got on the Surly the sun was out, the sky was blue, and it felt like springtime. I zoomed down the hill and around the side of downtown Baltimore for a quick swim in the pool before heading the other way and up to Locust Point for some treats. It had been almost a week since I did this typical ride and it felt like home, the same row houses and red lights and intersections where cars tend to just run right on through the crosswalks so you have to be extra careful, even when you’ve got the green. It’s nice to get to know a place, but it’s also nice to just know one, and Baltimore’s a good one. I took my time on the ride home, enjoying the sun that’s probably going to be gone for the rest of the week. The Inner Harbor was so quiet, but it won’t be soon, summertime right around the corner, and oh this place looks different then. I dodged the traffic on President and took my slight right onto Fallsway and took my time up the hill. I stopped to take a picture of this mural on the side of a house at Guilford and Lanvale. I pass it all the time, and I just like it so much. Isn’t it wonderful? But I’m always aware of the life behind this mural. These tend to pop up in neighborhoods that have been abandoned by capital. That house isn’t owned by or being sold to someone who would say no, you can’t use my house for public good like this. That tree in the foreground is one of the few on this block; I learned quickly when I arrived in NYC for college from Boise, Idaho that in cities, rich people got trees, but poor people didn’t. Artists have moved into the old warehouses just down the block, and we’ve seen what happens when that happens, sometimes. There’s writing on a building in the distance in this picture, just over his right forearm, that reads, “CARS KILL.” Yes, but so much else kills in this neighborhood, you know? I really, really love this mural. Pedal, pedal, pedal, all the way home. Spring Break, you came just in time.

2 thoughts on “Mural on a Building at Guilford & Lanvale”