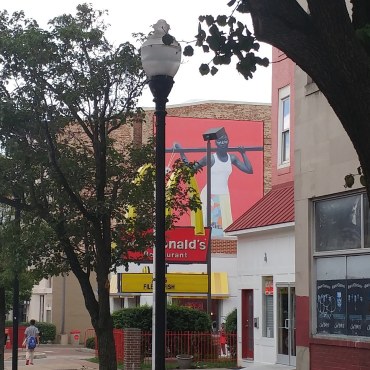 Wednesday’s ride was incredibly ordinary. I spent the first few blocks deciding whether to go south on Guilford, west on Lombard, or to go west on 27th, south on Maryland Avenue. I decided on the second so I could spend the bulk of my morning in the safety of the cycletrack, even though M. got hit by a car there on Tuesday, a reminder that nowhere is safe when car drivers are around. END_OF_DOCUMENT_TOKEN_TO_BE_REPLACED 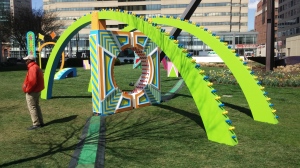 We’re reading this book for one of my classes right now, Queer Phenomenology by Sara Ahmed, and in it she writes about the lines we follow, the ways certain bodies tend toward other bodies and objects, and the worlds we make together. It’s a dense book, and we’re all reading the whole thing, because it’s college, and that’s what we do. Once I leave the classroom and the close reading, though, what the book has mostly made me think about is why some of us take up the bicycle as an extension of the body, as the tool that enables new lines to be followed, new worlds to be made. What is it that makes me feel like I can ride a bike in traffic with cars, in any neighborhood in Baltimore, at virtually any time of night, and others just say nah? What imaginations are opened and closed when we ride bikes, walk, take buses, drive cars? Same thoughts I’ve been thinking for a long time, but the book offers a different language, and I like languages.

END_OF_DOCUMENT_TOKEN_TO_BE_REPLACED 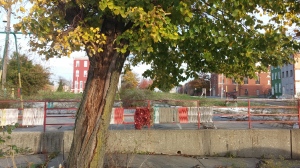 I’m still swamped at work in advance of a conference this weekend, so alas, Sunday’s bike ride had to end in getting some work done. Fortunately, A. needed a delivery of some packages from campus, and she lives out in Federal Hill, so I used that errand as an excuse to stretch my legs a little. It was unseasonably warm–the other cyclist waiting at the light at 32nd and Greenmount agreed that our jackets meant we were both overdressed–and I happily let the breeze touch my bare legs as I sped over and down the hill. END_OF_DOCUMENT_TOKEN_TO_BE_REPLACED

The temperatures have dropped again, spring break is over, and most of today was spent being a grading machine after yesterday was a wash–thanks, food poisoning! None of that meant I didn’t get to ride the Surly one last time before heading back to classes. I took her out for an afternoon ride around Waverly, running errands and remembering how important it is to remember gloves, and then out for a second ride, a short one down to Station North for the opening reception of the Open Walls Baltimore (OWB) project’s second year of events. OWB is a giant art project in the Station North neighborhood of Baltimore, which was designated an Arts & Entertainment district in 2002. That designation means tax benefits for redevelopment that targets artists, and tax breaks for artists who choose to live in these districts. The designation encourages new people to move into neighborhoods that are seen to be struggling due to a lack of residents, or, at least, a certain kind of resident. The arts district is great for tons of people–for artists, small business owners, and anyone who wants to see a vibrant creative scene get nourished in their city. And of course it has its problems–housing designated for artists is another kind of segregation, and isn’t that what we don’t want? And there’s the fear of gentrification–who wants to keep renting to non-artists when the real money’s in redeveloping and calling it “artist’s housing”? As the neighborhood becomes a site of value, property taxes also go up, and folks who have owned and lived in the neighborhood for a long time can find themselves priced out of their own homes. Like anything, it’s always more complicated than just saying YAY! ART! Same goes for OWB. It is a wonderful project that brings street artists from all over the world to paint ridiculously wonderful murals on some of our many, many empty walls. Who wouldn’t be excited by that? Well, there’s the part where murals and street art have become the sign of a blighted neighborhood; others argue that the project should employ some of the many Baltimore-based street artists who certainly have their own stories to tell on these walls of ours. Or maybe murals should be designed with community input–we’re the ones who move among them, after all. And then there’s the part where this year’s selection of 14 murals includes only one painted by women. One. In 2014. Wow. Now, it is certainly true that Station North Arts and Entertainment supports many women and trans artists in other ways through funding projects in the city, but OWB is what they’re known for, and that other support doesn’t change the fact that only one mural–and these things are huge and permanent–will be painted by women. The art world has a long history of just this sort of thing–check out these folks for evidence and some good history of this persistent problem. Tonight’s bike ride took me to the artistic intervention by the collective Greenpants. They projected their short video on the wall of the building that held the OWB reception, and it was howlingly good–funny, on point, and drawing attention to a thing we’re not supposed to notice–that yes, it’s all men, again. I watched a few rounds, chatted with the crowd, and then got back on my bike and headed up the hill to home, glad to live in a city that has such art, and such critical artists, and is willing to have these conversations. Now if they could just turn the heat on.

END_OF_DOCUMENT_TOKEN_TO_BE_REPLACED

I spent Thursday working on a grant application, asking for money to do a little something something with the artists I’m working with on a project that takes shape as it moves–my favorite kind. After getting a draft out to the co-conspirators I took the rest of the day off, hopping on the bike and heading down the hill to Harbor East to catch a movie. As I waited to cross Fayette from that tiny road between the church and the Brutalist postal office, one of the turning cars in the far lane stopped and waved me and a pedestrian across. I appreciate that kind of sharing, but as other cars backed up and started honking, I let it get to me and got off the road altogether, walking my bike across the cobblestones surrounding Shot Tower. END_OF_DOCUMENT_TOKEN_TO_BE_REPLACED 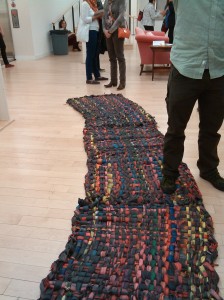 I had one of those Fridays full of meetings, so I didn’t get my usual bike ride in today. Instead I just got a quick zip down the hill to meet J. and friends for a couple of beers and a trip around MICA’s MFA Community Arts Thesis Exhibition. R.’s giant inflatables were inflated, N.’s phone app design was running on the computer, and D.’s woken carpet of old bicycle tubes was laid out for strutting. There were illustrations, videos, folded paper sculptures, (you have to see it–so much more than folded paper), and so many arts everywhere. My favorite part was the places made by the installation of the art–these were good places. And then we ate dinner and then it was time to pedal back up the hill for an early night. I’ve got a long way to ride tomorrow. Oh, bicycle, whatever would I do without you.

It was cold and rainy yesterday and dark and cloudy this morning, but by the time I got on the Surly the sun was out, the sky was blue, and it felt like springtime. I zoomed down the hill and around the side of downtown Baltimore for a quick swim in the pool before heading the other way and up to Locust Point for some treats. It had been almost a week since I did this typical ride and it felt like home, the same row houses and red lights and intersections where cars tend to just run right on through the crosswalks so you have to be extra careful, even when you’ve got the green. It’s nice to get to know a place, but it’s also nice to just know one, and Baltimore’s a good one. END_OF_DOCUMENT_TOKEN_TO_BE_REPLACED