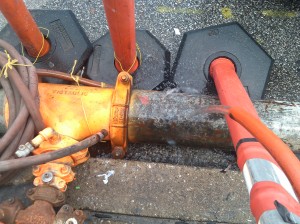 The rain stopped today, so I stayed dry on my ride up to Hampden to meet N. for beer, fried things, and some football. We got there early to grab seats, and we waited for the sports bar–a place covered in televisions and filled with purple jerseys–to turn up the sound. A guy asked if they’d turn on the sound, and the server asked, “Which game?” I think this might be a sports bar opened by hipsters who don’t actually watch sports, but once we were all sorted, we were set. We enjoyed the first half, but then it was time to get on with the business of Sunday. I unlocked my bike from a parking meter wearing a cozy and looked down at the mess in the gutter at 36th and Falls Road. A couple weeks ago some folks called to complain about low water pressure, and it turned out the infrastructure under there was all shot, no choice but to fix the water main. This means hooking up the neighborhood to water that runs above ground, in pipes like this one, via fire hydrants. This one’s also got water running into the street, the faucet on and flowing. I wonder what that’s doing to the water pressure around here, but more than that, I wonder how we will ever manage to replace the entire water and sewer system, the one that keeps springing leaks and causing sinkholes. We built it once, and it surely must have been a feat of engineering and financing. Why is there the sense that we can’t do the same now? But for now it’s going to be all slow patchwork and delaying the inevitable. And for now it was time to get back on the bike and take the long way downtown, a stop at the bike shop for a tune up appointment for the Surly after a long summer of riding and another in Harbor East to get fancy teas for the cooler nights. The streets were empty with all of Baltimore inside watching the game, so it felt like I had the place to myself–just perfect. Back up the hill to home, officially saying goodbye to summer.