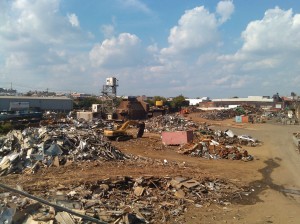 First, I know it’s unseemly to complain about such beautiful weather, but I am so over this heat. It was almost 90 today! And lest you think that’s a normal temperature and I just forgot last year, it’s almost 20 degrees above the average for this time of year, so shut it. I want it to cool down so I can wear leggings and snuggle under blankets with hot tea and complain about how it’s cold when I start my ride but hot about two minutes later and don’t tell me to layer i just want to complain. Enough. It was a beautiful day for a bike ride, and I took a nice one with Z. from downstairs over to the Creative Alliance for a bicycle tour with New Public Sites. Our friendly neighborhood artist/docent took us on what he called a “radical pedestrian” tour, seeing public sites–not the ones you expect, like parks and waterfronts, but the ones that you only notice if you’re paying attention and not following only the road laid out for you by the city planners of yore. He pointed us to alleyways and highway crossings and the tiny triangle in front of the Walgreen’s sign at the corner of Eastern and S. Grundy that he called a “seer’s node.” There’s a gate on that tiny patch of grass, but it’s not locked–thanks for the suggestion to climb up for a looksee. We continued our ride under the 895 and around, waving at cars zipping down off ramps and pushing some ride safety rules a bit far for my taste (which means, not far at all), and then I turned to ride back, taking O’Donnell through the industrial park that I never see when I’m just on the coffee shop/froyo part of that street. I stopped to take a picture of this scrapyard from above it. I’ve ridden through here from below, but I’m glad the tour took me somewhere new and reminded me to look around. And then it was a quick and hot pedal up the hill to Hampden to meet N. and R. for ice cream and everything felt like summer. Ok, I guess I’ll take it.