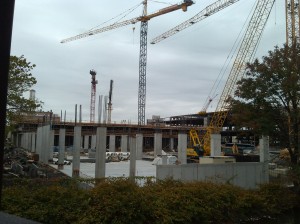 Last week’s heavy workload and heavier rains conspired to keep me off the bike for far too many days, so I was happy to have an open afternoon and cloudy but dry skies today for a longer ride. I headed up the hill for lunch and some football before heading down the hill to see what the football fans were doing at the stadium–hint: leaving early–and then I dodged traffic cones and wide-turners on my way to the Gwynns Falls Trail. It finally really feels like fall, but the greens are still mostly green and the overgrowth is still overgrown. I snapped this picture from the first bridge; the pile of bricks is gone, replaced by the skeleton of the casino they’re building down here. Now that’s going to be some traffic, but what could be better than a drunken stumble from the game to the casino for another round and some penny-slotting? Soon, soon, friends. I continued my ride around the waste treatment plant and my favorite Baltimore substation–Westport–and on to Middle Branch Park. I sat on the pier and eavesdropped on the game playing on the portable TV by the four guys taking a break from their fishing. A failed defensive stand with less (fewer) than two minutes left got me back on my bike, a have-a-good-day to the TV watchers. Rather than head back the way I came, I got myself on Hanover Street and took a left for a zig zag thorugh Cherry Hill. I was on streets I didn’t know looking at townhome complexes and the Charm City Circulator bus wash before spitting out where I started, back at the light rail tracks for a ride back into the traffic. Oh, so much traffic. I didn’t want to put myself in front of a line of drunk drivers, so after a couple circles in the one-way maze of Pigtown I settled into some grading at another bar, another football game in the background, and then it was time to head home on now-empty streets through West Baltimore up the hill to home. It was a most excellent day on the bike through the city, and wow, there are a lot of places to watch football on an October Sunday.