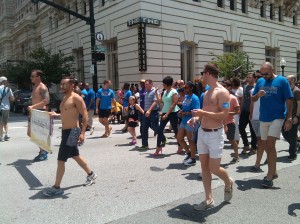 Saturday’s ride was a short one, down the hill to find Baltimore’s Gay Pride Parade. They moved it this year, so it was all spread out and felt pretty empty, and it definitely felt more sober as the party wasn’t right in front of the bar. In fact, drinkers had to stand in line, get a wristband, and drink inside the beer cage. That took care of the vomiting in the gutters and alcoholic littering, sure, but it also meant, for me, that it felt a whole lot less organic and a whole lot more like a police-orchestrated public space. There were gates everywhere, the parade was mostly banks and politicians–like our mayor here, marching in wild high heels and the police, thanked by several marchers in a demonstration, in my view, of our forgetting of our history as queer people for whom the police have been and in many ways still are a violent force in our lives. I later ended up in a long argument with some cops about whether or not women are allowed to go topless, or only men. That started to get ugly as they suggested it was S.’s “choice” to get arrested, insisted they needed to see ID and that we were required to show it at any time on any street if asked to show it by a cop, and then told R. this “wasn’t her fight.” I thought about the old days of Baltimore’s gay block parties, when they were held up in Waverly, organized by activists and I’m guessing without police presence. And I thought about how different our relationships are to the police–some of us feel safer when we see police on our corners, others feel endangered, and some folks seem not to notice they’re there unless they’re driving behind them on the freeway, in which case they step on the brakes. For me, yesterday, the cops were agents of arbitrary rules. I mean, there’s not clear law in Maryland about toplessness for women, but these cops decided that they’d enforce the arbitrary law because “somebody complained.” So, so many other people stopped S. to get a picture with her or were delighted by the appearance of something *actually* different in a space that used to be awfully queer. But when S. was asked to stop marching with the leather contingent because “it’s a family event,” well, the place stopped feeling queer to me much at all. So we got on our bikes, rode up the hill for a beer, and then I left early, a quick stop at the Mill Valley General Store to pick up our first week of our CSA. Suddenly buying some locally-grown turnips seemed a queerer way to spend my Saturday. Now if we can just get Mill Valley a bike rack, I’ll be set.