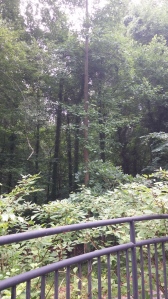 Thursday’s ride was a lazy one, up to Druid Hill Park for a few laps around the reservoir. Sometimes I just need a break from the constant car battle to just pedal and pedal, around and around, without all that thinking about how not to get hit by cars. I did a few laps and then headed up the trail toward the zoo and the rest of the trail. This park sits right between Hampden and Mondawmin, and those two neighborhoods are so, so different. Hampden is predominantly white, and has been since its mill days when the hiring rules were native-born whites only. Mondawmin, on the other hand, is predominantly African American, home to Douglass High School, which turned out graduates like Thurgood Marshall back when it was the segregated high school for Black students on the west side. Now it’s got its share of struggles, thanks in part to the way when white folks are asked to share, they just take all the balls and go home. Mondawmin is incredibly diverse when it comes to class, but racially? not so much. It makes sense that between these two neighborhoods, Druid Hill Park has been the site of so many struggles against segregation. On this particular Thursday afternoon, though, I had the place largely to myself as I pedaled up and down the soft hills to the steep downhill into Woodberry. I’ve snapped this particular picture so many times in so many seasons, this time, mostly just green green green–it’s summer, for sure. I popped out into the lower part of Hampden and took the steepest way back home–I’m in training for that ride through the Adirondacks, so I take it where I can get it. I’m looking forward to the new views, but these old ones felt new again today.