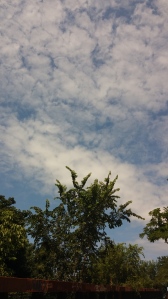 I spent most of last week riding my bicycle around–errands, work, getting miles in. I could tell I was riding a bit too much–I was starting to get kinda agitated and insomniacal, signs of overtraining, so I decided I’d pedal it back a bit, following my pops’ rule: whatever you do should make you want to get back on your bike again. And then it was Thursday, and I had a good ride out and back to work planned–the bonus of commuting by bike is that your long rides work themselves in without even trying. This one got a bit longer, though, because it turns out one of the riders on my upcoming tour is also from Baltimore. What a treat! He figured it out, emailed me, and we decided to meet at the William Wallace statue in Druid Hill Park–we’d checked each other out on the internet, and turns out we’d both blogged about it, so why not? We also both have Bromptons that we’ve ridden around Lake Pontchartrain in the last few months, and we’ve both worked for universities, and we’re both  gay as the day is long–perfect! I followed him from the park down and over and around Fort McHenry, working on that thing where you don’t go faster just because someone else is going faster, because every ride is your own. It was a beautiful day, and we spent a good hour of it sitting on the water, chattering and getting to know each other. I don’t like riding with other people, except that whenever I do, it’s a total pleasure. And then I had to get to work, so we took the long way around the harbor and a left on Lombard, left on Greene, right on Washington to Carroll Park where we went our separate ways–see you in Saratoga Springs! I kept heading west, up the Gwynns Falls Trail, stopping to take this picture of the sky on a rare 70 degree July day. What a treat, what a treat, a most beautiful city, a most lovely ride with a new friend. The ride back was quick and easy in spite of heavy legs, because it turns out I really, really love to ride my bicycle.