The heat wave broke with a beautiful overcast day on Tuesday, and I was lucky enough to have places to be on my bike and the energy to ride. My first stop was at the dentist for a six month cleaning and check up. I am lucky enough to have dental insurance, even though it mostly covers nothing but these check ups, so I get them on the clock–I’m not one to leave money on the table. I missed one cleaning, during chemotherapy, because the Internet suggested I avoid it due to risk of infection. I told my oncologist this at the end of treatment, and he was like, yeah, ok, you didn’t really need to do that. When you live in the online support group world where everyone posts their nightmares, it’s easy to get swept up in it. But whatever–I’m back to the dentist, happily letting the father-daughter team at Dr. Shelton’s office have their way with my mouth. It’s a gift to get this care in a world where we’ve somehow decided eyes, mouths, and spirits aren’t work the same level of care as the rest of us.

That ride took me through Waverly and out Ellerslie to 33rd, anything to avoid a few blocks on 33rd. And then I took the lane and pedaled as fast as I could as cars whizzed by me, because two lanes headed in one direction with a median is a freeway to drivers. I pulled up on the sidewalk at The Alameda, locked up, and went in for what would be almost an hour’s wait. It’s so expensive in so many ways to access health care, and I’m intimately aware of the layers of luck that let me do that.

I left with clean teeth and a trip south and west again to the gym. I took The Alameda (I love the “The” part) to Saint Lo Drive through Clifton Park, a route I haven’t taken in a long time. The park is beautiful, though the asphalt isn’t. The rumblebumble strips to slow cars are great for slowing cars, I hope, but on a bike, it’s not awesome. I popped out at Sinclair, took a right, and a left on Wolfe and took that all the way south.

That single street ride, just two miles of it, is a tour of uneven development and displacement, and the racialized nature of those things. I snapped this picture at Chase Street, at the entrance to Eager Park, part of the new neighborhood, Eager Park. This was called Middle East when I moved to Baltimore not even ten years ago, but it’s been rebranded by the Hopkins development. Neighborhood names in Baltimore are largely real estate marketing tools, so it’s no surprise they’re at it again.

From the angle of this picture it’s a brand new shiny park, the green just coming in and promising much more as the years allow for new growth.

Turn around and look the other way and it’s this, a boarded-up church and an empty lot. The edges in this city are like this, all over.

And then I continued my ride through Hopkins, across Orleans, and down through Upper Fells and Fells and west to Harbor East, entirely different worlds, all Baltimore City. It was a good day for a ride. 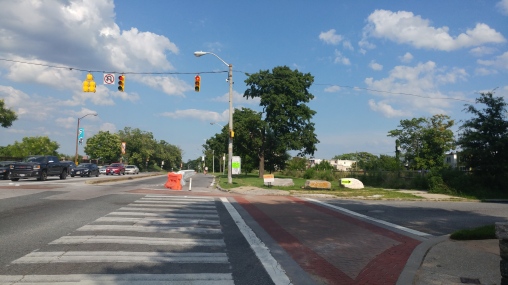 I haven’t been riding my bicycle much for the past two weeks, partly due to being out of town and partly due to having sole possession of a car for a whole entire week. I learned a lot that week–namely that you can go much farther much faster in a car, and it’s amazing how quickly I’ll take the easy way out, even if that means paying a few bucks for parking. Good thing I mostly don’t have a car, because I’d rather ride a bike, even if I forgot that for a few days.

END_OF_DOCUMENT_TOKEN_TO_BE_REPLACED 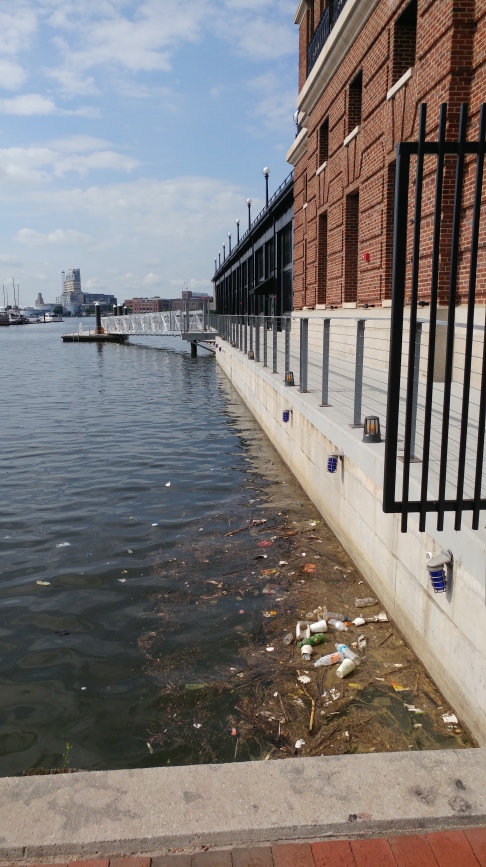 This week was one of regular bike rides, to and from work, just like the pre-cancer days–down the hill, take a right, lock up, and reverse it at the end of the day. It’s a good kind of weird to just act normal, and it’s also exhausting; I ended every day with a bone-crushing fatigue that frankly I’ll take over cancer treatment any day. I’m better, but I’m not just fine, and that’s ok.

END_OF_DOCUMENT_TOKEN_TO_BE_REPLACED

Today’s ride took me over to Johns Hopkins east hospital campus, as per usual. Today is the start of my second week of radiation treatment, and I got up plenty early to ride my bicycle for that 8:15am appointment. The promise of 70 degrees and sunny made me almost too excited to sleep.

END_OF_DOCUMENT_TOKEN_TO_BE_REPLACED

Thursday’s bike ride took me out in the city’s first Code Red Heat Alert day of the summer. Code Red means it’s going to be really, really hot, and you should probably just stay inside in a place with some ac. It also means that if you use less energy you get credits on your utility bill, so I was pretty excited to spend the day in somebody else’s air conditioning while the nickels rolled in at home. Sure, paying you to not use energy when you need it the most is sort of a scam to cover over weak infrastructure, but I’m a sucker.

END_OF_DOCUMENT_TOKEN_TO_BE_REPLACED 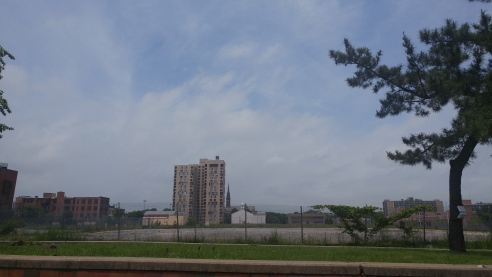 I’ve been working and working and working lately, totally overwhelmed by work. That doesn’t mean I haven’t been riding my bike, but it does mean I’ve largely been riding to work, to meetings, to acupuncture appointments, and to dinner and drinks and play when I can sneak it in. Grades are in for the spring semester, though, and summer school doesn’t start until Wednesday, so by Saturday afternoon I started to feel the loosening of vacation and a glimpse or two of the me that emerges when I have time to get just a little bit bored. And today the rain let up and the winds died down, and I got to take a bike ride just to see what I might see.

END_OF_DOCUMENT_TOKEN_TO_BE_REPLACED

I didn’t have to go in to campus on Wednesday, so I spent my morning answering a thousand emails and grading a thousand this and thats until it was time to head downtown to meet C. for lunch. I took it easy, letting the bike carry me down the hill and to the left, down the Fallsway bike path and left again through Little Italy before taking a right on Central Avenue to enjoy that weird shifting bike lane down to our lunch date. Central Avenue has a bike lane that feels like nobody really planned it, they just thought they’d throw down some paint. I appreciate that after crossing Fleet, it shifts to the middle, between the straight and turn lane, but cars still don’t seem to expect me to follow that lane. And then it runs next to back-in parking and ends up taken over by the front of all those cars. Like I said, it’s a great idea to have a lane here, but yeah. I locked up my bike to a parking meter, because bike racks are still a rare thing around these parts, though there are plenty of bikes riding all over downtown. C. and I had a lovely lunch, spent mostly with him answering my zillion questions about Zipcar. He works there now, and it turned out I had a lot more questions than I thought I did about car sharing. Who cleans the car? What happens if I report low gas in a car? Is the extra insurance really worth it? (I decided that I’m finally middle class enough to start buying my way out of risk–quite the revelation.) Who names the cars? Who joins up? How do you talk folks into sharing instead of buying a car? Did they give him that logo jacket, or did he have to buy it? (They gave it to him.) And then I got a tour of the office–all open floor plan, filled with bikes and Red Bull, I even met a couple of the guys who keep all those cars clean–it was like seeing behind the curtain. I love my car share membership, even though I don’t use it all that often. Every time I go to book a car I see the actual cost of driving, and I have to stop and think: do I really need a car to do what I’m about to do? Almost always the answer is NO, but sometimes the answer is yes, and I book my car, a little extra time to go through a drive thru, because that’s what cars are really for, if you ask me. Zipcar means I don’t have to own a car, but I can still drive a car if I need to–total win, and I wish everyone would give up their cars–doesn’t yours mostly sit around all day anyway?–and jump on board with the sharing plan.

And then I wandered around the neighborhood, checking out the construction at Harbor Point(e), already missing the open view of the water, now obscured by the tall buildings going up to provide more expensive housing for people I am not entirely sure exist. I stopped at the Whole Foods for some bulk groceries and got back on the bike to head home. It’s the time of year where every ride feels like nostalgia for summertime when I take these rides much more often, and it was good to be on another old route. And then I had to jog into the traffic lane on Central because the bike lane is now valet parking for the Hyatt, another building that’s blocking the view. Talk about a total buzzkill. Urban change is always happening, whether we call it gentrification or development or something else, and loss is always a part of that change. For me, this is what the losses looked like on Wednesday–not the biggest ones by any means, but losses nonetheless.