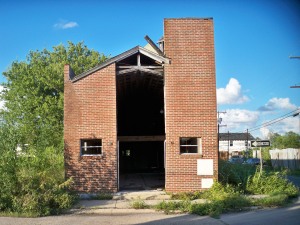 It was a beautiful summery day in New Orleans, so after work and homework, I pulled up a map of the city and picked a place to ride; today it was Gert Town. I went up Louisiana, through the Neighborhood Development Foundation’s recently-established Hoffman Triangle neighborhood, and then took a left on Erato, where I stopped to snap a picture of this small burned-out church. It is, according to the plaque on the front, Home Mission Baptist Church, rebuilt in 1972. I wonder what’s happened to it since then. Is this Katrina-related destruction, or the general destruction of a poor Southern city? The rest of the block was in similarly bad shape. There was another decaying church at the end of the block, and across the street sat the back seat of a car, not to mention the structures falling down or gone in the rest of the neighborhood. After the levees broke there was a lot of attention focused on the Lower 9th Ward, but most of the region went under water, and neighborhoods like this one, Hollygrove, and Dixon, which I also rode through today, look to be in serious straits. Except, of course, for the New Orleans Country Club, all gated off from the rest of the neighborhood. Yeah, they wouldn’t let me ride my bike around their parking lot–I’m not a member. (I can’t seem to find any information about the NOCC online–I’m super-curious about their membership policy. Anybody know anything?) So I rode up Palmetto and alongside the 17th Street Canal separating New Orleans and Jefferson Parish and then home again home again through the city via Canal and Broad. It was a good ride through neighborhoods that need to be seen more often by more people.

3 thoughts on “Home Mission Baptist Church at Erato and Gayoso”