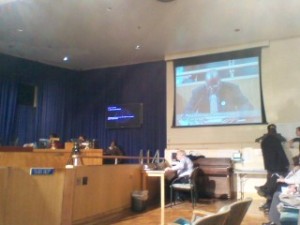 The Surly has been out of commission for awhile, through no fault of its own, but all is well now, and I was excited to put on my bike shoes, roll up my pants leg, and clip in to ride down to City Hall for the city council meeting this morning. This was my first council meeting here in New Orleans, and I was lulled into submission by the opening proclamations and declarations recognizing area entrepreneurs and firefighters and families. Then we heard a prayer, said the pledge, and then the lights went down as if the Hornets were about to play or something–but no, we were treated to a music video featuring the national anthem and a whole bunch of NOLA scenes, some of which were way out of date (that park isn’t actually there anymore…). Weird. Then people gave testimony while the city councilmembers chatted amongst themselves, got up and left, or just turned their backs. Then they asked questions that would have been answered if they’d been listening to the presenters. I snapped this picture while Dwayne Boudreaux, owner of Circle Food Store and Stephanie McKee of the 7th Ward Neighborhood Center, talked about the need to bring this vital institution back to the 7th Ward. I learned some rather stunning facts today, like New Orleans has about 18,000 consumers per grocery store here, 10,000 more than the CDC recommends to guarantee access to healthy food for a community. New Orleanians live an average of three miles from their nearest grocery store. That’s way too far away for a population with low car ownership, especially if we consider the needs of the elderly and young families. Circle Food was not just a grocery store, but a community center, and it was wiped out by the storm. All the recovery money meant to rebuild and bring jobs and justice to neighborhoods won’t have done its work until Circle Foods reopens. Yep, we are still in recovery, people. I learned a lot today, about Circle Food Store, food justice and politics in New Orleans, the rudeness of bureaucracy, and just how hard people are still working to make our city whole. I hopped back on my bike and rode home in the sunshine, feeling both frustrated at the pace of things and hopeful about the future, because what else are you going to do, really?