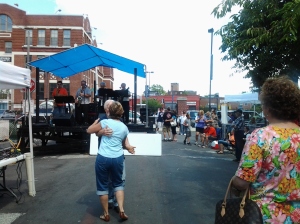 I wasn’t in the mood for much yesterday, if I’m being completely honest (so tired!), but I had plans to meet A. and V. down in Little Italy for the San Gabriel festival, so there I was on my bike, rolling down the hill. And yep, that instantly lifted my mood. I stopped for a quick lunch to avoid the fried everything at the street fest and then rode over to the Flag House to lock up and meet A. for a wander. The festival was just like every street festival on every street everywhere, except this one had more bingo and bocce ball, and instead of funnel cakes, its fried dough was a big flat piece with granulated instead of powdered sugar–I give that switcheroo major thumbs up. We meet up with V. and D. and wandered to the end of the block where this band of old Italian dudes were playing some greatest hits–songs from Cats, Frank Sinatra, and the crowd favorite, “Just a Gigolo”–as a few couples danced around. It had the feel of a zydeco festival (sans the delight of zydeco, but what can you do?) where if you want to dance, just make eye contact with one of the slightly drunk older men, and he’ll surely take you for a spin, but if you don’t want to dance, keep those eyes down. I was oddly not in the mood, so A. and I kept our eyes just a bit down and we watched. Partner dancing is so much fun to do and to watch, and these folks were great at it. Yeah, I need some good night’s sleep and more social dance in my life, that’s for sure. A soda, some fried dough, and a dozen unsuccessful rounds of bingo later and it was time to limp back up the hill to rest my weary legs in hopes of a better ride tomorrow.

2 thoughts on “A Band and Dancers at Stiles & Lloyd during the Feast of St. Gabriel Festival”