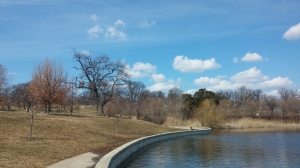 I’m on spring break, and oh, it is a beautiful thing. Winter was a rough go this year, and it just feels so good to feel sunshine past 7pm, even if as I write this we are under a winter weather advisory for tomorrow. Whatever, Tuesday was beautiful, even with the howling winds. My ride started heading east, because I’m usually heading west. I took the whole lane because fuck, it’s a holiday (but really because that’s the safest way to ride on 33rd Street), and headed toward Clifton Park. I pedaled downhill–thanks, wind–and dodged potholes and bump-bump-bumped across the rumble strips that I’m sure are a good idea for some reason closer to the fields where the kiddos play football on Sunday. I waited my turn at the light, took my left on Sinclair, and rode past the now-empty warehouses that line this street before crossing Erdman Avenue for the tiny climb past the Baltimore Cemetery, a place I’ve passed a zillion times but never explored. It’s a mammoth place, and I have a feeling when it was put there it was in the suburbs, even if today it feels like it’s right in the middle of things. Sinclair now runs all the way to Edison Hwy, thanks to a construction zone finally zoned out, but I still took the jog right past the pizza dough factory and right again past the police station, just to avoid extra time on Edison. I took my right, took the lane again, and did the rolling hills up over the recycling plant and past the giant field where they play soccer sometimes for a zigzag through the neighborhood, past the boarded-up houses and the gas stations and the car washes and the busy steps until I hit Highlandtown. I was tired of dodging potholes–one was stuffed with a still furry dead rat in a Very Baltimore Love Story–so I headed to Patterson Park to sit in the wind and watch the ducks dodge trash and get their spring flirt on. I snapped this picture of the perfect sky and trees and thought about how the camera lets me crop out some of the uglier stuff, but how when I think about what I see, it’s the ugly stuff that I think about. I wouldn’t change that, but it is also nice to be able to crop it out for a second and just remember this view. And then I rode around a bit more, stopping in Fells Point to see if people were already getting their St. Patrick’s Day drunk on–they were–before heading back up the hill to home. Winds were howling in my face and I pedaled hard, hoping I wouldn’t have to stop on the way to puke–it was really windy, and I’d had a beer (or two)–but I made it home. Vacation, vacation.