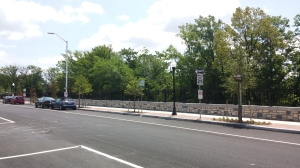 Tuesday’s ride took me up the hill and east to Morgan State for a conversation on the Marc Steiner Show about The Wire–about how even though it’s a great television show, it can’t tell the full range of stories about what make this city tick, and the many ways folks work to make it tick better (or worse). It was a good conversation with smart people, and a reminder to me that if you don’t have someone there to talk about women, women fall right out of the discussion. Patriarchy’s a real thing, which means I’ll never be out of a job, amirite? And then it was time to  bike home. I took the long way, meandering around Northwood, getting myself lost enough, working on this week’s goal: get that bike into a gear so easy you don’t lose your breath going up even a steep hill. It worked, and by the time I found myself in Guilford–which only happens when I’ve gotten lost going east/west in north Baltimore, to be honest–I was still breathing easy, flying down the hill from Loyola to Johns Hopkins. In just three or four miles tooling about I saw so many different places that all call themselves Baltimore, none of which, in this case, “looked like The Wire.” I stopped for a quick sandwich and then headed to the bike shoppe–I developed a slow leak in the rear tire over the weekend, and it was time for a new tube. I took St. Paul to 26th, a street that’s been closed forever due to landslide. It’s open again, one-way this time, and it looks so fancy. The asphalt’s like ice, the striping’s like snow, and the sidewalks are even in a way I don’t think I’ve ever seen a Baltimore sidewalk be even. I snapped this picture of all the new, wondered what it’d be like if more of the streets got to be new, and then was on my way. I took my time back up the hill to home, and got to spend part of my evening swapping out tubes–I gave thanks for the hundreds upon hundreds of miles that old tube supported, and took the time to switch out for locking skewers on my wheels. Nothing like a little amateur bike repair and a beer on a warm summer evening to settle things down.