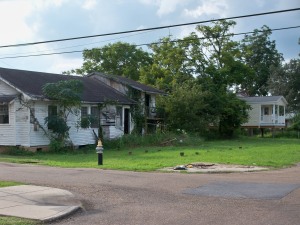 I woke up a little sore from last night’s dance party, so I knew it would be a lazy biking day. After a ride down to the Lower Garden District for lunch with N. and a stop at the office supply store for a new set of markers, I rode out Martin Luther King, continuing in my efforts to map the city by bike. I ended up in the Central City/B.W. Cooper neighborhood. I took this picture of two houses from the corner of Second and S. Rocheblave. This is what uneven redevelopment looks like in so much of the city. The lot on the corner is empty except for the studs of the structure that used to be here. The house to the left is decaying and cat’s claw is taking over. The back addition is sinking in; it looks kind of like melted frosting. And then out there in the middle of the block is a new house, raised high on stilts, with stickers still on the windows. This one scene offered a snapshot of the city as a whole. Living here means living with constant reminders of the levee breaches and also the general poverty of the region that leads to this urban blight. You learn to tune it out in some ways, but it takes a psychological toll, living here. I wish there were the mental health services available that this city needs.