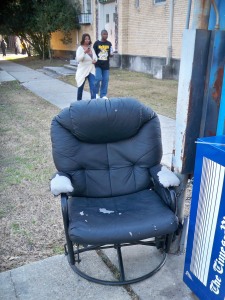 Well, it’s the day after the NFC Championship Game, and everybody’s still in their black and gold. I rode up to campus expecting an empty classroom at 9:30, but lo and behold, there they were, putting the desks in a circle and ready to talk about the gender politics of their Saints viewing parties. After teaching and then zipping out some recommendation letters and work emails, I hopped on Rhoda and headed home. I stopped at a red light at Napoleon and Freret and took this picture of a chair chained to the traffic pole. There are often people sitting in this chair, but today the seat was free. I have no idea who chained an old office chair to this pole. I’ve seen all kinds of folks sitting in it, but I wonder if they all know each other. Like, were people sitting out on their porches, talking about this corner and how long you have to wait for the bus there, and how great it would be if there were a chair there? And then somebody made the plans a reality by wheeling this thing over and locking it up here? Or did somebody just put it out there for him- or herself, figuring she logs enough hours there to make it worth leaving it, even if it means other people sit there? Is it locked up next to a box selling the newspaper because everybody wants to sit down and quickly finish up the crossword? I don’t know. But I do know there should be places to sit and wait for the bus, and I’m glad someone took it upon themselves to set something up.