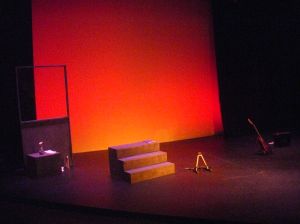 I have a long history of insomnia, which means I’m quite adept at dealing with it, but that doesn’t mean after a few days of it I’m not tired. So yeah, today I was tired. My commute to campus felt twice as long and my legs were heavy and slow. The students were game, though, so classes went well as they picked up my slack. After writing this rec letter and reviewing that honor’s thesis, I was finally ready to bike home and take a quick nap before getting back on my bike and heading down to the theater for Intríngulis at Southern Rep where I would bartend for my ticket. I used to insist that I didn’t like live theater. I don’t like the stage voice with its projection or the wild gestures or the homemade sets, I’d say. Like how I still claim to hate musicals, even though every musical I’ve ever seen has made me so happy (except maybe for that one). But I think I’m finally ready to admit that I like live theater. Tonight the lights went down, I had my glass of red wine, the set was nothing more than what’s in this picture, and Carlo Albon came on stage and spent the next 75 minutes telling us about the struggles of undocumented immigration and parents who just don’t understand. So many people got together and put on a show, and I just got to sit there and watch. I grabbed a quick snack after the show and then pedaled home on the icy smooth new asphalt up Magazine. The air was so cool and there were patches of jasmine. I love riding my bike home at night.