It’s the end of February, which means spring is around the corner. It’s hard to be excited about spring when we barely had a winter. I wore gloves on today’s bike ride downtown, but it was one of only a handful of times I’ve felt the need to slip them on. I should have slipped them on more times than I actually did so, but sometimes I have to learn a lesson over and over again in perpetuity, apparently. But spring is here, as evidenced by these cherry blossoms in front of the nursing school on Lombard. 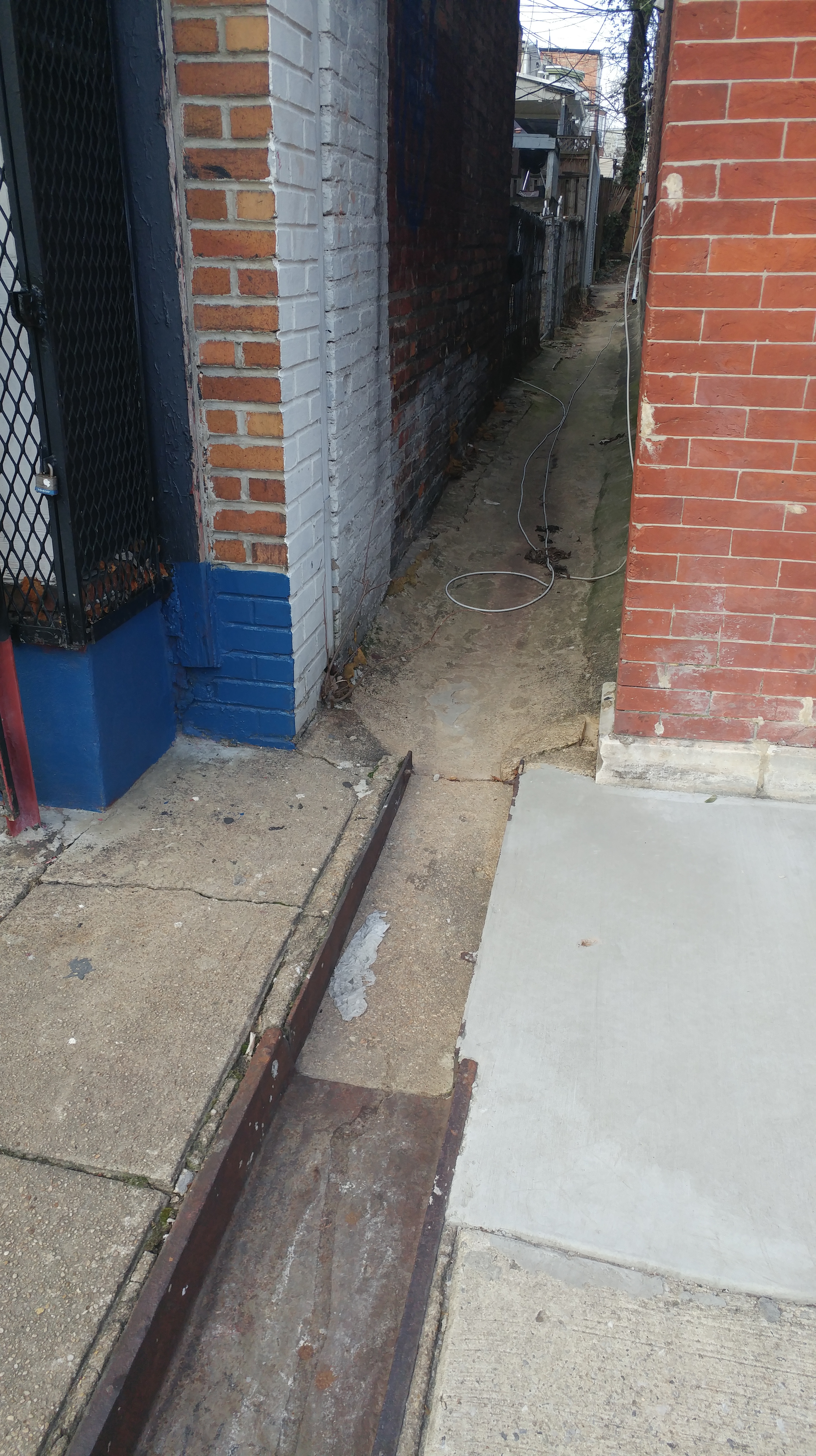 When you ride a bicycle or walk you have to pay really close attention to the surfaces you are traveling on, especially in places like Baltimore where the infrastructure is aging and, in many places, in serious disrepair. When you’re driving you have to do this too–you don’t want to break an axle or whatever dropping into a giant pothole–but cars can handle a lot more than bike wheels and feet. I know my regular surfaces really well–the sinking manhole cover just across 25th Street, the ever-present piles of horse shit on that one curve of Fallsway cycletrack, the rough asphalt where they buzzed out some paint lines on Biddle just west of Broadway.

END_OF_DOCUMENT_TOKEN_TO_BE_REPLACED 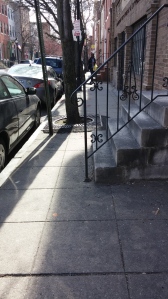 I was still feeling pretty terrible on Thursday, but I wasn’t about to miss class after all the snow days we had last month, so I went ahead and suited up (i.e. put on clothes that weren’t pajamas) for the morning ride down the hill to the shuttle to work. It felt amazing, even if a bit chilly, to ride without leggings on, the morning breeze on bare legs. Yep, I’m still dressing aspirationally–for the weather I want, not the weather I have, though I don’t think weather has anything to do with health, so whatever. I locked up to the now almost full bike racks at the University of Maryland Medical Center, and then walked up the few blocks to meet N. for the ride to work. END_OF_DOCUMENT_TOKEN_TO_BE_REPLACED 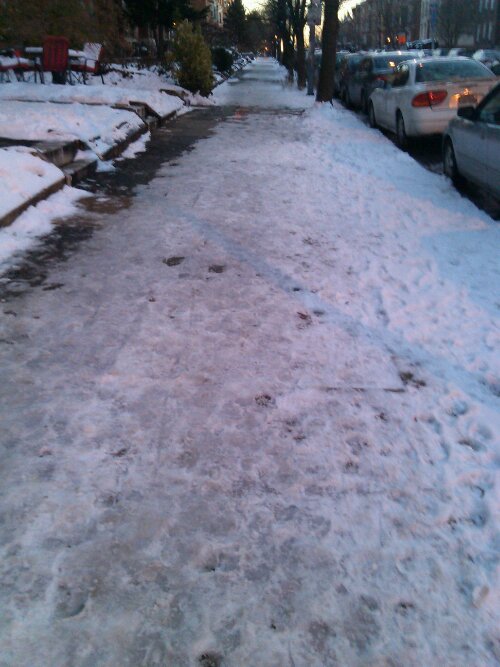 I know, I know, I could let some air out of my tires, get snow tires, ride slowly, and do fine on roads with some ice and snow remaining on them, but I could also just not ride the few days a year when there’s ice on the roads in Baltimore. Yeah, that’ll work, but I’m still not going to drive if I can help it, so I layered up and walked up and over to Waverly to meet O. and R. on Saturday. Yeah, I might rethink that decision next time, because the streets, especially the better-travelled ones, were mostly clear–wet, but not icy. The sidewalks, on the other hand, were treacherous ice sheets, glistening their evil eyes up at me as I made my way slowly and carefully, making sure of each footing before lifting another foot. The sidewalks were iced over because unlike the public property of the streets, sidewalks are the responsibility of individual homeowners, and apparently either individual homeowners don’t know that, or don’t care. The sidewalk in front of my house was iced up because I guess I was waiting for the landlord to deal with it. By the time I slid my way home that evening, though, I realized I had better remove enough ice for folks to pass easily. I chipped away, slowly but surely, and this morning it is starting to melt enough to make way. As I was chipping away, though, I wondered why we have individualized this particular collective infrastructral issue and not decided instead to spend our social wage to make easy passage for everyone, not just drivers. Because walking was truly dangerous yesterday, and how can it be that we make passage so dangerous, especially for those for whom walking is challenging in the first place? But hey, at least the roads are clear. 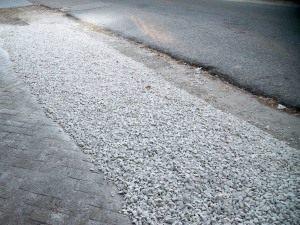 I only had energy for commuting today, so my bike ride just took me up to work and back, workaday pedaling, just trying to get there and back. As I rode up to my house I noticed this new addition of gravel to the front of the place, in that netherworld between street and sidewalk. Not to get too deep or anything, but whoa, that’s a seriously liminal space. END_OF_DOCUMENT_TOKEN_TO_BE_REPLACED 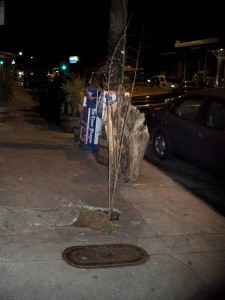 I don’t know if you’ve heard, but it’s really cold in New Orleans right now. It is much, much colder than I can remember it being since I moved here, and I don’t exactly know how to ride a bike in this weather. I know, I know, you just ride, but how do you stay warm? I realized today that I don’t even really have a decent coat. END_OF_DOCUMENT_TOKEN_TO_BE_REPLACED 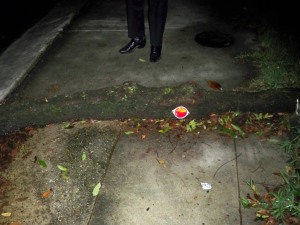 I am under the weather, all sniffles and sinuses, and this is really putting a dent in my bicycling. I mean, I need to breathe, people! But after some decongestant and guaifenesin, I was in shape to ride to the CBD to meet K. for our weekly dinner date. It was hot and cool, depending on the shade level, and I showed up thirsty. END_OF_DOCUMENT_TOKEN_TO_BE_REPLACED 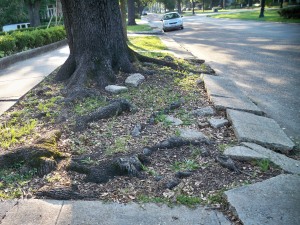 Today’s bike ride took me to yoga class. Jack’s big panniers easily carried yoga clothes, mat and towel, along with a book, locks, patch kit and pump, and leftover crap from past rides. This bike is seriously good for travel. END_OF_DOCUMENT_TOKEN_TO_BE_REPLACED