Today’s ride took me to the Irish Channel to meet K. for dinner at the place where we’ve been having dinner for three years. I’m spending the month in the Marigny, so the ride was uptown instead of downtown, which it was for most of my time in New Orleans. After dinner I headed to J. and B.’s house for a dinner party–I kept it to dessert. Ordinarily I would take Jeff Davis to get there, but tonight I went Piydras to Galvez to Orleans, following the bike lanes and sharrows. I rode home the same way and then through the Treme. I rolled along Governor Nicholls, but not to stop at S.’s place–she moved over to Barracks. I stopped for traffic at N. Rampart and took a picture of this broke-down shopping cart on the corner. I had no idea their front wheels could go flat. I wonder how many different streets this cart rolled down to end up here, waiting for the bus. I mean, I don’t think there’s a Winn Dixie in the neighborhood. There’s the tiny Rouse’s in the corner, but other than that, the area is pretty much limited to drugstore groceries, and I need more than cereal, peanut butter, and Folger’s coffee. That’s what I miss most about living Uptown–easy access to fresh food. This neighborhood must be starving.

Another parade? Are you serious? I am done with parades for now. I’m in the place of intense relief that carnival is over and things are getting back to normal–I’m doing my dishes, cooking actual meals, folding laundry, and answering emails. I had way too much to do today to go out for yet another parade. END_OF_DOCUMENT_TOKEN_TO_BE_REPLACED 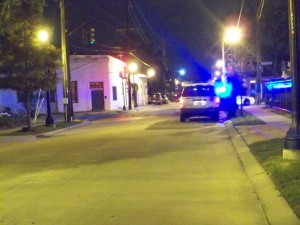 After dinner tonight I hopped on my bike and rode down to the coffee shop to do some reading. It was a lovely, humid night, perfect for a ride. I rode up Annunciation on my way home, but had to go around this police activity. END_OF_DOCUMENT_TOKEN_TO_BE_REPLACED

I’ve been taking a few days to recover from my long birthday ride in the heat (as well as the wee bit of drinking I did that night), so I have just been riding Rhoda around on errands for the past couple of days. But that’s what bikes are for–transportation wherever you happen to need to go–so it works for me. END_OF_DOCUMENT_TOKEN_TO_BE_REPLACED

The weather in New Orleans this week has been positively sick. I mean, check out the sky in this picture. Yep, that’s the color of the sky in late May in New Orleans. I took Jack out for a short ride this afternoon after a positively lovely day writing, reading, swimming, and yoga. END_OF_DOCUMENT_TOKEN_TO_BE_REPLACED

Yes, this really is a picture of the sky in New Orleans today. That blue is ridiculous. I was riding down to a coffee shop to do some reading, and decided to get off Magazine Street and enjoy the occasionally smooth pavement of Laurel Street. This neighborhood–part Irish Channel, part Lower Garden District–is incredibly mixed. END_OF_DOCUMENT_TOKEN_TO_BE_REPLACED